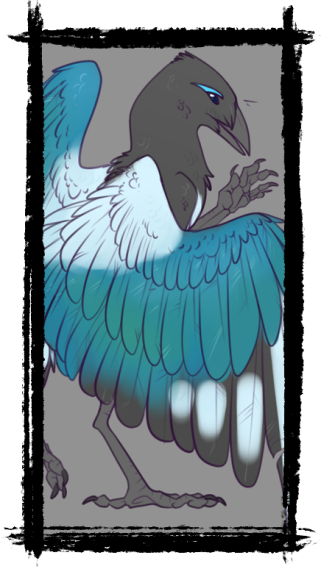 We’ll be posting the 20 Questions exercise for each of our player characters throughout the next week so you can get a better feel for each of them before we get too deep into the story. We are starting off with Kitsune Shio, our kenku-in-disguise.

1. WHAT CLAN DOES YOUR CHARACTER BELONG TO?
Fox. While a kenku, Shio has semi-official license to call herself Kitsune, as she has spent much of the past 15 years in Kitsune Mori aiding the Fox Clan with all manner of difficulties.

2. WHAT FAMILY DOES YOUR CHARACTER BELONG TO?
While she is a somewhat footloose individual–as comes with being centuries old–Shio has spent many years in Kitsune’s forests quietly helping the family as they have grown. The namesake kitsune are old friends; she spent a lot of time amongst them prior to the Rokugani family’s move into the woods, and still visits the two-tailed fox Hasako in Kitsune Mori Mura whenever she can.

3. IS YOUR CHARACTER A BUSHI, A SHUGENJA, OR A COURTIER?
Like most kenku, Shio is a very competent swordsman, though she regards it with more of a sense of fun than duty. Swordplay and mercenary work are activities that keep her mind sharp and away from brooding thoughts.

4. HOW WOULD OTHERS DESCRIBE YOUR CHARACTER’S APPEARANCE?
A bird. A very flashy bird: she sports brilliant white over her chest and shoulders, and scintillating blue-green iridescence over her coverts and long, obnoxious tail feathers. If seen as a human, she’s fairly inconspicuous: a short, wiry, dark-skinned woman with a big nose, her black hair streaked with white.

5. WHAT IS YOUR CHARACTER’S PRIMARY MOTIVATION?
Vengeance. Her motivation for this has slowed somewhat in the past year as Shio begins to consider whether she should let the past lie, or if she should retreat to Sakkaku or Chikushudo.

6. WHO IS THE PERSON YOUR CHARACTER TRUSTS MOST IN THE WORLD?
Shio trusts the foxwife Hasako, her on-and-off lover and friend, with her life. The pair have known one another for a decade, give or take, and have dealt with bandits, poachers, and spirits together.

8. WHAT DOES YOUR CHARACTER THINK OF BUSHIDO?
Shio doesn’t particularly mind bushido, seeing it to be mostly a good set of guidelines, but finds a lot of the emphasis placed upon it by Rokugan’s samurai families overzealous. Gi is particularly ridiculous to her–obfustication and trickery are an art, a joy, and a necessity to any kenku. The tenet she respects the most is jin. She finds cruelty exhausting, and operates on the idea of “you scratch my back, I’ll scratch yours”. It has a relatively high success rate.

9. WHAT IS YOUR CHARACTER’S OPINION OF HIS CLAN?
Shio feels a deep debt to Hasako and the Fox Clan for sheltering her and accepting her in her darkest hours. She feels a deep pride and respect for them, and wishes only for their continued quiet prosperity.

10. IS YOUR CHARACTER MARRIED?
Shio’s most official partnership was with Kinari, and their relationship spanned over a century, though recent circumstances broke them apart. She has a slightly on-and-off again sexual relationship with Hasako, though this is… complicated.

11. DOES YOUR CHARACTER HAVE ANY PREJUDICES?
In her many years of wandering, Shio has spent time amongst quite a few of the Clans, but found Scorpion and Lion the least palatable. The Lion’s distrust of non-humans and enthusiasm for conquest bother her for obvious reasons, as a fairly freewheeling non-human herself, while the Scorpion’s often malicious scheming has bitten her a few times in the past.

12. TO WHOM DOES YOUR CHARACTER OWE THE MOST LOYALTY?
Shio “serves” no one but herself, but will come to the aid and protection first and foremost of Hasako. She also has a protective streak towards the Fox Clan in general, especially those with close ties to the spirits of the forest.

14. DOES YOUR CHARACTER HAVE ANY RECURRING MANNERISMS?
She moves with a distinctive jerkiness, and turns her whole head to look at things. Her body language is bird-like; her feathers are sleek in nervousness, puffed in agitation or in contentment. Her pupils pin in anger or excitement. Her voice can seem strangely metallic, as if emerging not from her mouth but from her lungs.

15. WHAT ABOUT YOUR CHARACTER’S EMOTIONS?
Shio tries to a certain degree not to offend Rokugani sensibilities with outbursts of emotion, but doesn’t go too far out of her way. She’s always more boisterous, less patient, less serious. Her most common break in etiquette is laughter, a human sound that she delights in.

16. HOW WOULD YOUR CHARACTER HANDLE A SUBORDINATE’S IMPROPER BEHAVIOR?
Human lives are fleeting and Shio does not expect them to get things right; how can they know even half of what’s needed when they live less than a century? Seppuku for honor does not make any sense to her. She is most likely to give a reprimand and show how to correct the mistake if one occurs in front of her, or just brush it off.

17. HOW WOULD YOUR CHARACTER’S PARENTS DESCRIBE HIM?
Her parents are elsewhere in the world, ancient and respected teachers of the sword and medicine. Shio has deep respect and love for them, and still visits them on occasion. Her mother, Suzume, a swordsman who has spent many generations with the Yoshun family of the Owl Clan, is a little disappointed by Shio’s freewheeling attitude. She had hoped Shio would join her in teaching, but does her best not to judge her. Her father, Yuuto, is a wanderer and sage of medicine, and wishes only for Shio to enjoy life.

18. WHAT IS YOUR CHARACTER’S HIGHEST AMBITION?
Shio has relatively modest goals for an immortal being, but the ideal she aspires to is to be ever-learning: she isn’t so naive as to believe she will ever master all arts of the sword, but she wants to study with and learn the techniques of as many cultures as possible.

19. HOW RELIGIOUS IS YOUR CHARACTER?
Shio gives obeisance and offerings to the Fortunes and kami when she can, but is not particularly spiritual. She is very much a creature of the physical world, and while she respects them and their influence on Ningen-do, she does not feel she owes them particularly much.

20.HOW WILL YOUR CHARACTER DIE?
Kenku are immortal, but Shio often finds herself surprised that she hasn’t been killed yet. Ningen-do is tumultuous, at best, and Rokugan is not known for its peaceful nature, so Shio looks at her long lifespan with a sense of expectation. She suspects she’ll die to someone’s well-placed sword, or perhaps to her own.

Shio is played by @raptorwhistle .